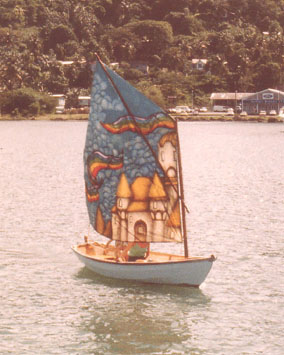 I began construction of my first cruising sailboat Fishers Hornpipe in 1974, in Half Moon Bay, California. She was a heavy-displacement 40’ cutter—a real solid ocean-going vessel, into which I invested years of work, income and thought—essentially my youth.

As the time to go cruising approached, I began to search, in earnest, for The Ultimate Tender. This boat would have to serve several purposes: regular transportation to and from the mother ship; a fishing and gathering vessel; diving; recreation and exercise; and she would be our sole lifeboat. To this last purpose, the dory seemed my best choice, as I consider it the most seaworthy of all small craft.

Through the writing of John Gardner (his books and articles in “National Fisherman”), I became interested in New England surf dories. These dories were considerably smaller than the Banks models developed for cod fishing (those launched from schooners at sea). They had rounded sides instead of straight sides, giving more stability when unladen (Banks dories are notoriously tender until laden with fish or cargo). Mr. Gardner had included an early-20th-century William Chamberlain model (from Marblehead, Mass.) in his book Building Classic Small Craft, and she caught my eye. On a visit to the East Coast, I talked my way into the archives of Mystic Seaport to look at perhaps the only surviving original Chamberlain dory. It was love at first sight!

Back in California, I took my scribbled measurements from the Seaport model plus the lines adapted by Mr. Gardner, and set about to design my Ultimate Tender. I limited her length to twelve feet, as the beam of my cutter was fourteen feet, and I intended to carry her in stern davits. [Although I didn’t know it then, many marinas limit tender length to 12’.] The original Chamberlain model was 13’ 6”, and Gardner’s model was 14’. Now 12’ is much too short for a true dory—the type simply won’t work at that length—but I believed the rounded sides, with an increase in beam, might achieve my goal. I made her beam 52” (Gardner’s was 50”). I wanted to be able to load the boat with seven people—the maximum number I could comfortably sleep aboard Fishers Hornpipe—and I wanted a stiffer-than-average dory that could be sailed in strong winds and rough seas. I gave her two rowing stations so she could be properly trimmed with any number of passengers, as well as be rowed by two people. I gave her plenty of rocker on her narrow bottom, a strong sheer, and enough freeboard to heel sharply without shipping too much water. I agonized over the rake of her transom, as I wanted the option of carrying a small outboard motor on rare occasion. Instead of a sculling notch, I opted for a rowlock gudgeon (strap-type) at the inside-top of the transom.

I designed her with three frames, a stem, transom, and plank bottom. Her sheer was reinforced with inwale and gunwale, with the frame heads and spacing blocks between them, so that two people could lift and carry her by slipping their hands around the inwales. Whereas the original models had employed four planks per side using lapstrake construction, I opted for plywood over solid stringers. The effect, in cross section, was that of a triple-chine dory (a Banks dory has only a single chine). I combined the two lower planks into a single, wide garboard, and employed chine logs (seam battens) for the knuckles, butting the plank edges instead of lapping them.

I chose the loose-footed sprit rig for its low aspect ratio, simplicity and convenience. To remove the rig, all that was necessary was to stand the sprit up vertically, fold the sail in half, wrap it thrice around the mast and sprit, tie it off with the rope traveler and lift it out of the boat altogether. The rig could be completely set up or removed in well under 30 seconds. In fifty years of playing with every rig except the crab claw, I have never found another rig that is so simple, convenient or effective. With no boom, the sail would brush your head when tacking or jibing with out bumping it. To wing the sail out on a run, I stuck the handle of one of my eight-foot oars into the sheet at the clew and propped it outboard. The inboard end of the oar was tucked under the opposite inwale. The narrow waterline of the modified dory hull combined with the light weight of plywood construction resulted in the most easily-driven form imaginable. The marriage of hull and rig was absolutely perfect.