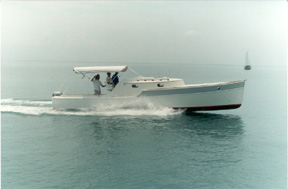 This boat started life as a custom design for a Key West developer. We worked from sketches and photos of older boats and added some modern ideas and curvaceous “art-deco”-inspired forms. “Commuters” were classic early cabin cruisers used by prominent businessmen to come to work in style in the 1920’s. The “power sharpie” is an extreme shallow draft hull form of very light displacement. This specific hull is a modified sharpie form having a deep, short V-bottom bow, which flows aft-ward into a shallow arc bottom. While the model is not as sea-worthy as deep V shapes, it can be poled like a flats boat in a scant eight inches of water. This makes it an ultimate shallow-water “gunkholer,” bone-fishing boat, and wetlands explorer. The prototype “Magic” is used extensively in the Everglades and Florida Bay north of Key West. She is ideal for exploring wildlife in remote places, running up shallow rivers and mangrove creeks, anchoring behind keys and exploring deserted beaches that no other boat of this size and accommodation could even dream about approaching—and she is capable of staying there for days at a time.

The cabin provides six feet of headroom, and there are berths for four, plus a large galley and head with a shower. The cockpit is huge, with a PT boat-style helm station, and a large awning for shelter from the tropical sun. The boat is outboard-powered for simplicity, easy maintenance, and so the boat can be poled across bars and flats.

Construction is very simple, light, strong, fast—and inexpensive. The hull is planked with sheets of ½” plywood—two layers on the bottom laid at opposite diagonals, and one layer for the topsides, joined with butt blocks. The hull is built over ½” plywood bulkheads set up on a strongback. There are no frames or floors. Sheer clamps, chine logs and bilge stringers are ripped from conventional 2x4 stock. The deck and coachroof are foam-core plywood—1/4” over 1 ½” closed-cell polyurethane foam with 1/8” plywood headliners. Internal deck beams are sawn from 1 ½” spruce 2x12’s and are spaced between the two ply layers in the same layer as the foam. Fore-and-aft web frames are ¼” (now upgraded to 3/8") plywood and extend from bulkhead #2 to the transom. All blind compartments are foam-filled, giving the boat enough positive floatation to make her unsinkable—the foamed compartments also prevent vibration and noise from pounding. There is a huge 110g. fuel tank under the bridge deck, and two 30g. bladder-type water tanks under the settees. There is a large ice box, and a 30g. holding tank for the marine toilet. All exterior surfaces are covered with Xynole-polyester (Defender Industries) fabric saturated with epoxy. This composite is vastly superior to fiberglass as a covering system for cold-molded wood construction. Paint systems are linear-polyurethane outside and epoxy inside. Trim is varnished mahogany inside, and natural teak outside. Table, doors and drawers are varnished mahogany, except the entry door, which is teak. All hatches and portlights are opening. Gel-cell batteries are located aft of the fuel tank compartment under a water-tight hatch. Ceiling planking is varnished cypress. The cabin sole is teak and holly plywood.

The entire construction process took eleven weeks for the prototype. Materials costs, including engine, tankage and awning, were about $25,000. For power we settled on the Honda 90 four-stroke. [Years later Erik upgraded to a Yamaha 115.] Steering is hydraulic, with a 24” stainless steel destroyer wheel. Single-lever control is Morse. “Magic” cruises at 19 miles per hour consuming slightly less than 5 gallons per hour, and runs wide open at about 24 miles per hour. Because of her extreme shoal draft and light weight, this design is not intended for use in rough water, for long off-shore passages, or for being driven hard for extended periods in high chop. She is, however, safe and comfortable, and capable of crossing the Gulf Stream to Cuba and the Bahamas in settled, predictable weather. And she has the fuel range to make such trips practical. 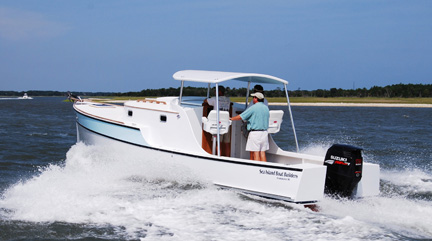 Although the original Commuter 36 was ideal for her purposes, clients interested in the design were concerned about her extreme shoal draft; in    particular her inability to run at high speeds into large chop. Hence in 2004 I designed a modified version with deeper V-sections in the bow, increased draft (to 12”), increased displacement (to 6,000lbs), and increased power (to a maximum of 175hp). Sea Island Boat Builders in Charleston, South Carolina built one of the first new models, and named her BIG GIRL. As can be seen by comparing photos, the second-generation hullform rides differently than the first. Her ability to punch into moderate chop is greatly improved, and she only pounds under rough conditions. Mark Baines of Sea Island took me for a ride in October of 2010, during which we ran out an ocean inlet during a mild northeast wind with two-foot seas. At 20kts there was no pounding.

Differences in the two Commuter 36 hull forms are compared in the drawing below. In the second generation hull, the chine emerges from the load water line (LWL) well aft of design station #2 instead of forward of it; the V-sections in the bow are markedly deeper; the chine originates higher on the stem; the point at which the V-sections merge into the arc-bottom is further aft, and the stern is deeper to support the additional weight of the larger motor (or twin motors). An unexpected positive side effect of the new hull is a three-inch increase in headroom. The hull rides slightly lower in the bow, presenting more “V” to the waves.

Because the wind-slipping tendencies at low speeds were still present with the second-generation hull, Mark retrofitted a 12’ long skeg, tapered from ½” forward to 3 ½” aft, ending two feet forward of the engine transom. In Mark’s words: “The only real difference in handing was that it increased my turning radius; it actually made it slightly tougher in tight maneuvers. After a couple of months I removed the skeg. You can use the small idiosyncrasies, drifting to the side in very slow turns; [you can use the] effects of wind on the bow in tight quarters to your advantage.” Hence like Erik, Mark felt that one simply had to get used to driving the boat. 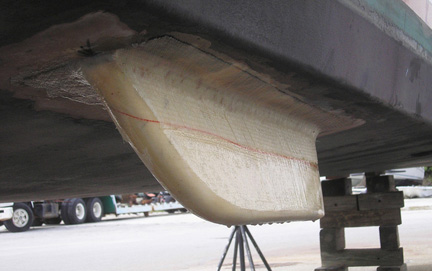 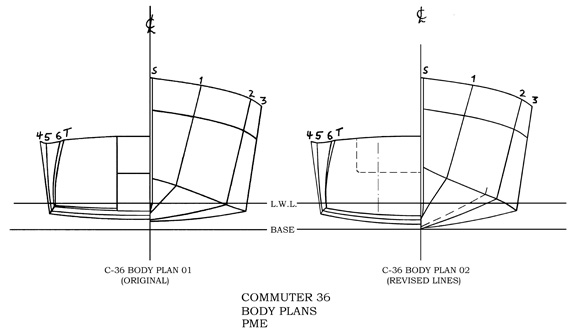 Because MAGIC has such extreme shoal draft, she has always been difficult to maneuver in cross winds at low speeds. I proposed to Erik that we add bilge keels to MAGIC’s bottom, and he gave me a green light.

I designed the bilge keels to be 30” long, 6” deep, and 1 ½” thick. My partner Bill Smith had just made bilge keels for a large trawler, and he used expanded PVC material to laminate them. We decided to use the same material for MAGIC’s bilge keels, covering them with biaxial fiberglass cloth after laminating and shaping them.

Treating the Commuter 36’s outboard profile above water as a sail, I computed the center of effort. Similarly computing the center of lateral plane of the hull underbody, I located the bilge keels near the fore & aft center to counter-effect the windage above. I chose my balance point such that the bow would fall off before the stern in a direct cross wind. Although MAGIC’s laminated plywood bottom is 1” thick, there is also (fortuitously) a bulkhead centered above this location. I placed the bilge keels 4” inboard of the chines for protection.

In early February of 2011, Erik retrieved MAGIC from my shop in Ft. Pierce (we had also made some repairs and repainted her), and drove her home to Key West. Bill and I had made a test run, but I admit I was nervous about the new bilge keels until the following email arrived:

The bilge keels are a success. They have improved the handling in a number of subtle ways, and have no discernible effect on speed that I can feel. They don't cure any problems completely, but they do make the boat easier to handle. I am glad we added them.

Leeway in a crosswind is now more neutral and probably a bit less overall than it was. Though the bow still falls off, it is less of a problem.

Slow speed maneuvering feels more secure with the boat pivoting rather than skidding. There is more of a feeling of the boat following the bow rather than the stern being shoved over.

High-speed turns are more level with less dramatic banking. The dramatic banking of the past was more fun, but it also created a tendency to lift the prop and cause it to lose grip and spin out. Though it is still possible for that to happen, the tendency is noticeably reduced. I think the boat to a certain extent trips against the outside keel in a high-speed turn. Though it is not enough to cause outward lean, it is enough to almost level it out. Because of this I wouldn't make them any larger or dreaded outward lean could result.

Tacking around the anchor in a wind is still the norm, but the motion is considerably slower than it was and without the jerking that would happen at the extremes of the oscillations.

Thanks for the good work. I really didn't want anyone else to do it….