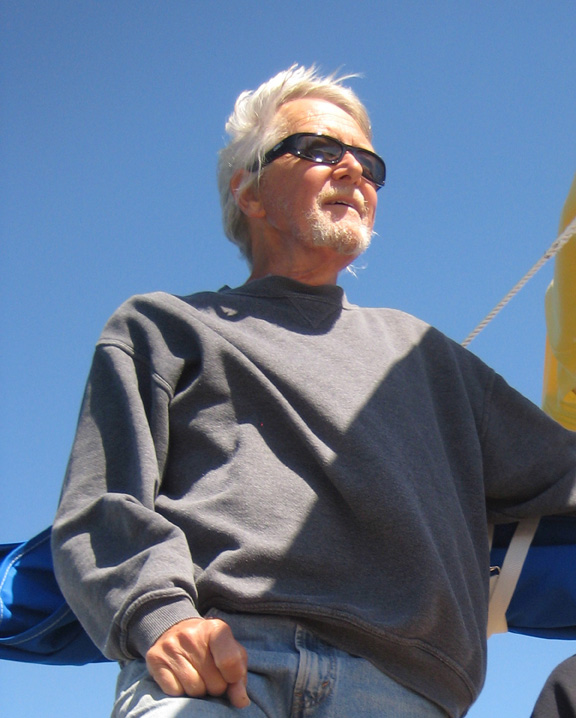 Reuel B. Parker was born in Denver on 2/19/46. He grew up in Colorado, Maine, Massachusetts and New York. Much of his childhood was spent on the south shore of Long Island (Bay Shore), where he learned about boats, boat building and boating. He built many models as a child, and began building and restoring full size boats in 1958, at age 12.

Captain Parker was educated at Colorado State College, State University of New York at Farmingdale and Columbia University in Manhattan. He studied physics, engineering and music. He studied oceanography and emergency medicine in California, attending night-classes at two community colleges.

After a "back to the land" stint in California in the early 70's, Parker built a 54' LOA ferrocement cutter named FISHERS HORNPIPE, in which he traveled some 35,000 miles, visiting twenty foreign countries in Central America and the Caribbean. At 45 years old, FISHERS HORNPIPE is still out sailing the Caribbean! In 1985 he built the 44' LOD cold-molded wood cat-schooner TERESA DE ISLA MORADA (the original Exuma-44), to directly test his design and construction concepts for that type of construction. His next personal vessel was the 30' LOD 1926 Alden Malabar Jr. sloop IMAGINE, which he restored twice, the second time in cold-molded wood/epoxy. His next and largest vessel was the 75' LOA Virginia Pilot Schooner LEOPARD (the original Pilot Schooner-60), on which he lived and traveled for five years. His next cruising home was the prototype Lorcha 50, a 65' LOA ketch T'IEN HOU, a modernized Lorcha (a traditional vessel combining Chinese and Portuguese technology from the 16th century). In early 2010 he launched the prototype Maxi-Trailerable Sharpie-45 IBIS, a gaff-rigged schooner, in which he made four cruises through the Bahamas, proving the value of traditional flat-bottomed sharpies as island cruising boats. Parker is now (2017) building his seventh personal cruising home, the Sardine Carrier 53, based on the commercial Maine fishing vessels, with a narrow, deadrise underbody. This one is a true motorsailer, which will easily sail and motor at speeds well over 10 knots. At age 71, still healthy, fit, and agile, Captain Parker is looking for a new first mate, with whom to sail off into the sunrise.

Captain Parker has worked in residential and commercial construction, boatbuilding, and restoration for over fifty years. You can see his most recent house in the Brokerage Page. He has designed, built, repaired and restored boats in wood (traditional and cold-molded), ferrocement, steel, aluminum and fiberglass. He has been living and traveling aboard his own cruising sailboats since 1975, and intends to continue doing so indefinitely. He asks to be buried at sea, the fastest way to re-enter the food chain, and the most environmentally safe way to dispose of human remains.

Much of Parker's design work draws on the wisdom and pragmatism of working sail from previous centuries, combined with contemporary materials and construction techniques. But he also stays abreast of new technology and incorporates it into all his work, even re-designing or modifying vessels when appropriate. His opinions about the ongoing battle between grass-roots marine architects like himself, and licensed naval architects/marine engineers, include the belief that competent designers should have experiences combining extensive offshore sailing, coastal cruising and gunkholing, and all kinds of boatbuilding. A college degree is a wonderful thing, representing years of dedication; but it cannot compare to knowing first hand what happens to different vessels in full gales at sea, or which construction methods can create the strongest, most durable yachts economically. Learning from books is one thing; learning from experience is quite another. A good designer must have plenty of both.

Reuel Parker created Parker Marine Enterprises in 1974, both as a design house and custom boatbuilding operation. Although Parker Marine no longer builds boats commercially, we still build an occaisional prototype, hull/deck package, masts, keels, rigging and other components. Parker Marine can also be coaxed into woodenboat restoration projects, especially if the boat is of a high pedigree. Parker's cruising powerboats fit the category LDL (Low-Displacement-Length) in an effort to make them as effecient and environmentally friendly as possible.

Capt. Parker began writing books and magazines articles in the 1980's. He is a regular contributor of articles to WoodenBoat Magazine and BoatBuilder Magazine (now defunct), and he has started writing articles for Good Old Boat Magazine, Professional BoatBuilder Magazine, and Latitudes and Attitudes Magazine. His Sharpie Book is published by McGraw-Hill under the International Marine imprint. The New Cold-Molded Boatbuilding is now published by WoodenBoat Publications. THE VOYAGES OF FISHERS HORNPIPE, about those first long cruises along the Pacific Coast, Central America, the Caribbean and the U. S. East Coast, is published by Parker Marine Enterprises. There are several new books in the works, including Seabrights and Garveys; Workboats of the New Jersey Shore, Practical Woodenboat Restoration, and Second Editions of The New Cold-Molded Boatbuilding and The Sharpie Book.

Capt. Parker spends summers in Maine, and winters in South Florida and the Bahamas. You can contact him by emailing info@parker-marine.com.  Reuel Parker wrote Blogs for WoodenBoat Magazine's website: www.woodenboat.com, under the heading The Whiskey Plank. He also highly recommends the excellent books of his friend Scott B. Williams, especially The Pulse series. These may be purchased in electronic or paperback forums at Amazon.