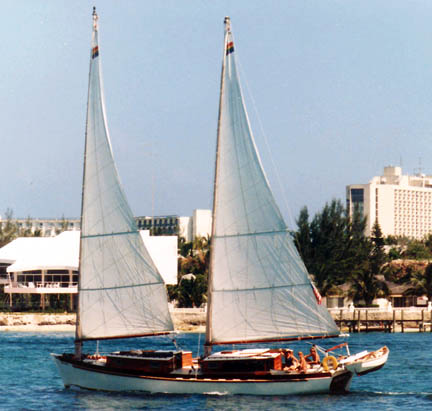 THE EXUMA BOAT SERIES consists of eight cruising or working sailboats from 27’ to 68’, designed for the vast shallow waters that make up the best cruising grounds in America and the Caribbean.  The Exuma hulls have full-bodied arc-bottoms, a subtle chine and flat, flaring topsides.  They are fast, seaworthy, very strong and economical to build.  The hull shapes evolved from American working craft on the Chesapeake Bay and elsewhere, and from the yacht designs of Commodore Ralph Munroe and N.G. Herreschoff.  The hull bottoms are of triple-laminate construction—double-diagonal plywood planks laid over fore-and-aft tongue-and-groove lumber.  Topsides, decks and coachroofs are two layers of plywood.  The designs can be built in fiberglass, or adapted to metal construction.  The Exumas are marconi-rigged with the exception of a gaff-ketch option for the 36-footer and gaff-schooner option for the 27-footer.

The EXUMA 44 is the second I designed for the series, in 1985. PARKER MARINE built the prototype in our boatyard in Islamorada that same year. I named her TERESA, and owned her for three years, during which I lived on board much of the time, and sailed her over 8,000 miles, from Key West to New England and the Bahamas, several times. I found her to be a fantastic cruising home, and ideally suited to island hopping in the tropics.

The EXUMA 44 is powered with twin 4-cycle outboards in wells, with the option of an inboard diesel under the bridge deck. With outboards, the motors are tilted up and plugs dropped into the apertures, providing a clean underbody with no drag. In this configuration, TERESA was capable of speeds over ten knots on a slightly broad reach.

With no standing rigging, the sails can be let out forward of the beam, enabling uncommon performance running wing and wing. TERESA could steer herself by just dropping the tiller into a comb even sailing dead downwind in ten-foot seas and 20-knot trade winds. I have never heard of any other vessel having this capability.